Another year passes, and still I have yet to swim in the ponds at Hampstead. Will the Olympics be my excuse not to this year? Does anyone want to suggest a potential date for a swim?

Would anyone be up for joining me in a flying trapeze lesson this summer? It is quite expensive, but could be fun to fly through the air? Gorilla Circus have outdoor classes in Regents Park and Battersea Park.

Also, we previously discussed going for a swim outdoors, perhaps Hampstead Bathing Ponds? Who would be up for this? (And when will actually be not quite so freezing?)

In case anyone is interested in going swimming, I thought I'd mention that you can get free entry at many pools in Britain until 2 February 2011 with purchase of a bottle of Schweppes Abbey Well water. You just buy a 500 mL or 750 mL bottle and take the cap to a participating pool weekdays during certain hours. They'll take the cap in lieu of the normal admission price. You can get the bottles for £0.50 to £1.00, whereas pools often charge between £2.50 and £4.50, so it's a pretty big savings, proportionally speaking.

The official website lets you search for participating pools, and shows you the times the deal is valid there. There are three pools in Waltham Forest participating, including the Cann Hall Leisure Centre and Leyton Leisure Lagoon.

Okay, so summer is a long time away, but I was just thinking about outdoor activities I'd like to do next summer, so thought I'd make a list of them anyway. Anyone else have any ideas?

ftp_fitnessers; I'm the Brighton branch. I'm also part of the Skint Brigade so generally everything I do by way of exercise is free. That is to say, to be fair, I've got a certain amount of money already sunk in stuff that lets me do exercise, like running shoes and a sports bra, but I enjoy the fact that it's free at the point of use; that the more exercise I do, the less these things have cost me per use. This one only required sturdy shoes, which in my case are ancient army surplus boots. Thank you, I. Berger, for looking after them well when you were issued them and also writing your name in huge letters on the tongues so we know who you were.

Anyway. What with there being quite a lot of gloriously sunny weather down here on the South Coast recently, despite the chilly northerly wind, me and my partner decided to make good use of it and see some more of Sussex. Cissbury Ring has been catching my eye on maps for years but I've never been, so that's where we went. It's an Iron Age hill fort on the South Downs, north of Worthing, a 65 acre hilltop enclosure surrounded by earthworks a mile round, a mass of flint mine pits and the remains of early farming, covered in short turf and sturdy flowering plants from the millenia of sheep grazing that have made the Downs what they are. From the top on a clear day like that, you can see Beachy Head thirty miles west and the Isle of Wight thirty miles east, never mind any immediately approaching threats, traders or anything else. Flint tools from Cissbury have been found as far afield as the Eastern Mediterranean, so they obviously had something good going on.

As well as wandering round the fort itself, we took a route along a farm track to cross the South Downs Way at the north edge of the Downs, and turned along that a short way to Chanctonbury Ring. That's another, much smaller hill fort, now mainly marked by a circle of beech trees planted by a sixteen year old optimist in 1760. He lived to write a poem about them at the age of eighty five, which isn't bad going, but then he was a rich land-owning type, and the land is still owned by his great great grandson. The 1987 hurricane had a bit of a go at it but many of the trees were replanted and it's looking much more circular again these days.

After that we meandered east along the South Downs Way, and then down a bit of the Monarch's Way, a 615 mile track marking the route of Charles II's escape after the Battle of Worcester. I'd never heard of this track before, but apparently part of it goes right through the streets of Brighton to the Palace Pier; how did I not know about that, given that I've lived here for most of fifteen years? I'll have to look into some more of that route, and see about walking the urban parts. Then our route looped back to where we'd started (gmaps pedometer route here for anyone amused by that sort of thing) for a total walk of just under nine miles in about three hours.

The specific bits of the scenery were interesting, it's true, but mainly it was great to be out in the Sussex countryside and walking. The huge blue sky, intermittent clouds making everything look dramatic, the low sun late in the afternoon and the ridiculously green fields... I'm a sucker for the sea, though, and I was always looking south to see it. The Downs are like a giant ampitheatre for looking at the sea from, I sometimes feel. If you're anywhere near anything like this, and you have any chance any time soon in this last gasp of autumn sunshine, go and see if you can see something like this: 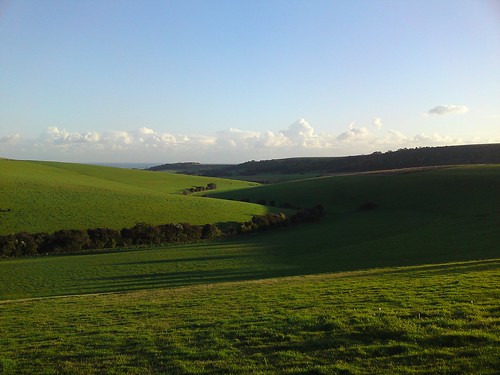 I'll be going swimming at the London Fields Lido from 17:30 to 18:15 today. Anyone who wants to join me is welcome!

Hello chaps & chapesses, anything happening? Who's reading this?
Collapse